Austin-based singer/songwriter and guitarist Jimmy LaFave brings a passionate rock & roll energy to his original folk songs, whether he’s playing solo or with a band. LaFave grew up in Wills Point, east of Dallas, but at 17, his family moved to Stillwater, OK. When he was in his teens, his mother purchased his first guitar for him with green stamps. While Stillwater was not exactly bustling with musical activity, it wasn’t a ghost town either, and it was close enough to Tulsa that LaFave found all the opportunities he was seeking as a young singer/songwriter. The musical heritage of the area certainly was rich enough: folksinger Woody Guthrie, jazz trumpeter Chet Baker, and jazz fiddler Claude ‘Fiddler’ Williams, plus songwriter J.J. Cale and Leon Russell’s Shelter Studios. But to find a wider audience and, more importantly, a record deal, LaFave thought it would be worthwhile to move to Austin. He found both after moving to Austin in 1985, and he’s been based there ever since. 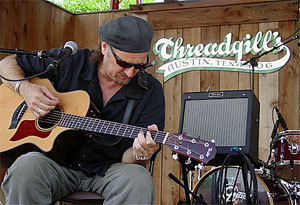