Sold out venues. Screaming crowds. Her name in lights. Joanne Shaw Taylor never anticipated any of that at the start. Back then, she was just an ordinary black country schoolgirl, bored with the disposable pop she heard on late nineties radio, rifling her father’s record collection for sunken treasure, and falling for albums by SRV, Albert Collins and Jimi Hendrix. ‘Guitars were lying around the house,’ recalls Joanne. At 13, she’d picked up her first electric and practiced every minute. At 14, she defied her teachers to play The Marquee and Ronnie Scott’s, and began to overcome insecurity about her voice. ‘I never set out to be a singer,’ she modestly told Classic Rock. ‘I’ve always had a deep voice. I think it came from my influences as a kid. When I was singing to records, I was listening to Albert Collins and Freddie King. When I was a teenager, I became a big rock fan: Glenn Hughes, Skin, Doug Pinnick. I wouldn’t get far on The X Factor.’ Since then, it’s gone stratospheric, with Joanne breaking into the notoriously hard-to-crack US market, beating the stereotypes of her age and gender, and being watched by 17 million viewers as she played an angel-winged solo during Annie Lennox’s set at the 2012 Diamond Jubilee Concert. That same summer gave us Almost Always Never ‘ a bar-raising third album that found Joanne dodging expectations, writing the songs her muse dictated, and diving in at the deep end with just her talent to keep her afloat. 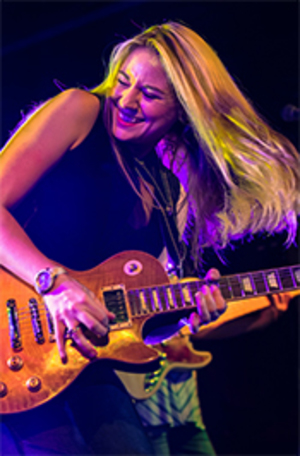