Joe Fletcher and Friends Sail On Through

Last night’s performance transported me into an old western bar. The only things missing were swinging doors and drawing guns. Joe Fletcher is a powerful performer with the innate ability to command a crowd, as shy or timid as that crowd may be. He got everybody out of their shells by the end of the night, with tasteful sarcasm and audience participation. Even today, I still find myself singing along to “I Never.”

For those of you who missed it, the lyrics go a little something like this: “I’d have never gotten on this ship if I’d known that it was gonna take me home. I was never meant for life on land and I can’t make it on my own.” I don’t know if it was this song, the tattoos or Joe’s overall presence that reminded me so much of Captain Jack Sparrow. That is, if Jack Sparrow was a talented musician.

Joe Fletcher and Friends entertained the crowd with their gritty sound and toe-tapping jams. Accompanying his acoustic guitar was an upright bass, an electric guitar and the occasional fiddle. While the raw music itself seemed to steal the show, Joe’s knack for songwriting, or story telling, did not fall by the wayside. His third album, “You’ve Got the Wrong Man” is a real gem; it’s like buried treasure in the depths of the folk world. 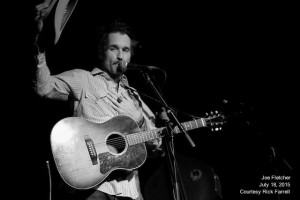 It was truly a gift having Joe and his opener Ian Fitzgerald, who reigns from the neighboring city of Boston, at the Narrows. A memorable moment was when Joe decided to give away the baseball, which you may have seen in our advertisement for the show. It was signed by all five musicians and given to the highest bidder.

During the middle of his performance, Joe announced, “Right now Ian Fitzgerald holds the highest bid at $2.25.”

“Now, now, now. Let’s not turn this into an auction house just yet,” Joe snickered. “We can all discuss after the show at the merch table. Throwing money at me will work best. The harder you throw… the more we’ll talk.”

A lucky fan left with the baseball, while the rest of us went home with good stories and high spirits.