Joe Krown (Hammond B-3), Walter Wolfman Washington (guitar & vocals) & Russell Batiste (drums & background vocals) started playing together in March 2007. The trio has been performing every Sunday at a local New Orleans nightclub, the Maple Leaf Bar. The combination of the soulful vocals of Walter with the big sound of the Hammond B-3 (which Joe also plays all of the bass parts on the B-3) and the masterful drumming skills of Russell Batiste Jr. has developed it’s own unique sound. The trio recorded and released a live CD, Live at the Maple Leaf (JK1003) in the fall of 2008. Live at the Maple Leaf captures the magic of these great musicians. ‘A killer collaboration between three of New Orleans greatest players!’ Jan Ramsey, offBEAT Magazine. 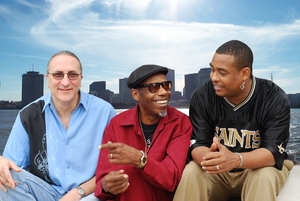