Multiple Grammy & WC Handy Award winner, Joe Louis Walker is one of the most heralded blues artists of our time. JLW is a true powerhouse guitar virtuoso, unique singer & prolific songwriter who has toured the world religiously throughout his career and earned himself a legion of dedicated fans around the globe. He has recorded with the likes of BB King, James Cotton, Bonnie Raitt, Taj Mahal, Huey Lewis, Branford Marsalis, Steve Cropper, Shemekia Copeland & Ike Turner, with a discography that counts 19 solo albums, 2 live DVD’s, and countless compilations and guest appearances. Still recording & touring with a vengeance, JLW is already being referred to within the blues world as a ‘living legend.’ However, as Walker himself would say, ‘the best is yet to come!’ Stony Plain Records announces a September 29 release date for Between a Rock and the Blues, the latest album from multiple Grammy and Blues Music Award-winner Joe Louis Walker, which features guest appearances by label mate Duke Robillard and former ‘Tonight Show with Jay Leno’ music director and guitarist Kevin Eubanks. Ten of the album’s dozen tracks were produced by Duke Robillard and feature a core band of Walker and Robillard on guitars, Bruce Katz on keyboards, Jesse Williams on bass, Mark Teixeira on drums, Doug James on sax, Carl Querfurth on trombone and Sugar Ray Norcia on harmonica. Stony Plain Records is distributed in the U.S. by ADA. 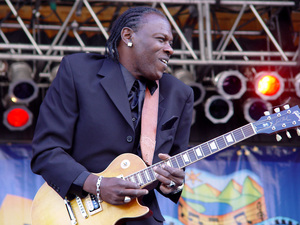