John Fullbright burst upon the Southwest music scene in 2009 with a stellar live album recorded at the Blue Door, the legendary venue in Oklahoma City. From his home in Okemah, Oklahoma – also the hometown of Woody Guthrie – Fullbright had already honed his songwriting and playing skills to a degree that he was a favorite at festival campgrounds before he was even out of high school. Quickly produced as a ‘calling card’ for the 2009 Folk Alliance Conference, Live at the Blue Door went on to set sales records at WoodyFest, the annual folk festival honoring Woody Guthrie. With the 2012 release of From the Ground Up, Fullbright, still in his early twenties, has joined the conversation about the best new artists in music today. Firmly rooted in a variety of musical styles, he draws on what has come before, but without imitation. Forget labels when you listen to John Fullbright. He is not folk, not Americana and not pop, but possibly the best fusion of them all. In the Grammy-nominated From the Ground Up, Fullbright traverses an emotional and musical terrain that is extremely broad, showing equal acuity with tender ballads and songs that make you want to drive faster with the windows rolled down. Fullbright’s earliest songwriting heroes, Townes Van Zandt and Mickey Newbury, infuse this record, but so do Jimmy Webb, Randy Newman, and many of Fullbright’s songwriting compatriots from Oklahoma and Texas. 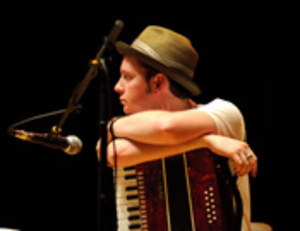