John Popper (of Blues Traveler) and the Duskray Troubadours

John Popper doesn’t know what came over him that one night last winter, although he has a pretty good idea. ‘Something in me kicked in and I just floored it,’ says the singer/harp slinger, referring to a brief, Beethoven-scored joy ride, that was the trip from his home to the recording studio in Santa Fe. ‘It was absolutely exhilarating. I felt free, because I was going to do something I loved, and just for me.’ That something was a month-long recording session in the mountains of New Mexico. The self-titled debut (due out March 1, 2011, through 429 Records) of John Popper and The Duskray Troubadours to be specific, a side project that’s more like a part-time band, a scrappy, roots-rock extension of Popper’s work in Blues Traveler. Now before you get the wrong idea, John Popper and The Duskray Troubadours is more than a Popper-led solo project or a back-to-basics whiff of nostalgia. It’s the sum of six rock-solid players’rounded out by bassist Steve Lindsay, drummer Mark Clark, guitarists Kevin Trainor and Aaron Beavers, and guitarist/producer Jono Manson’coming together to channel the loose, limit-less spirit of simpler days. ‘What I love about this album is that I’m playing differently,’ says Popper, ‘and not because I tried to, either. The music led me there, which is the best way to do it, really. On this album, melody is what drove everything.’ ‘It’s a full spectrum of songs,’ adds Manson, ‘but it all fits together. That’s because the main personalities on this record are the tunes. They’re the kind that could stand up with a whole band or one person singing them.’ 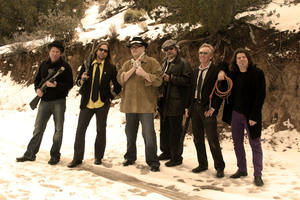