Concrete Blonde came howling out the chute in that year of our Ronnie Ray-Gun 1986 and knocked out three classic albums by 1990: Concrete Blonde, Free and Bloodletting. The latter begat the hit single ‘Joey’ ‘ a sobbing love song to a dying alcoholic ‘ perfect rock balladry. Napolitano was born in Hollywood ‘ the belly of the beast ‘ and her songs were (and remain) cinematic ‘ feature films compressed into three-minute rock ‘n’ roll: ‘Still In Hollywood,’ ‘God Is A Bullet,’ ‘True.’ Walking In London, Mexican Moon, and a collabo with Chicano punk-rockers Los Illegals followed. ‘Ghost Of A Texas Ladies Man’ and ‘Heal It Up’ ‘ among others — hail from that period. She is also one of the great song interpreters of our time, as proven by the way she turned James Brown’s ‘It’s A Man’s World’ and Leonard Cohen’s ‘Everybody Knows’ into Johnette songs. In between recording she toured the planet. ‘Gigging was always just as much about traveling,’ she explains. ‘Like my godmother told me when I was 9 years old ‘you must travel, you must go to Europe, you must see these places.’ I never forgot that ‘ this was my way out and into the world.’ She worked on side projects — Pretty & Twisted, The Heads with Talking Heads vets, and a legendary, much-bootlegged ’90s solo album that went officially unreleased because of record racket shenanigans. Just as importantly, the girl who’d dreamed of an unaffordable art school when she was a child became the woman who pursued all of her dreams. She’s been an artist and art gallery owner, conducted psychic readings, keeps horses, studied pottery with a master in Mexico as well as flamenco dance and song in Spain and is now a practicing tattooist. ‘I’m licensed to ill, baby!’ she proudly exclaims in her delicious, throaty laugh. Her Joshua Tree Tattoo business focuses on ‘nature-based design.’ After moving from L.A. a dozen years ago, she’s incorporated the desert aesthetic like she used to use Hollywood as a muse. ‘I absorb my surroundings,’ she explains. The 21st Century brought the gorgeous, solo Scarred, various Concrete Blonde reunions and her book Rough Mix ‘ a collection of short stories, lyrics and drawings. She’s now touring on her own ‘ just an acoustic guitar and her songs, passages read from Rough Mix against projected backdrops of original and found art ‘ and that voice. 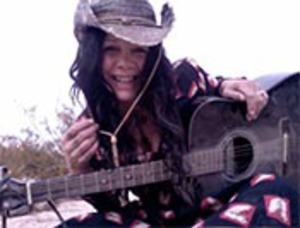