Not very many guitarists have ever had their own Signature model Gibson Guitar. Of course Les Paul and Chet Atkins do… and Johnny A. How good do you have to be to have that happen? Very, Very good.

Johnny’s debut album, “Sometime Tuesday Morning” did something an instrumental guitar record never does – it became a major hit at radio. Not Jazz, not Blues, not only Rock…instead, a thoroughly unique blend of those and other musical styles that create a “pop” sensibility and broad appeal other guitarists cannot match. Though an instrumentalist, Johnny thinks like a singer as he plays, composes and improvises. “I’m always interested in dynamics and tone far more than the amount of notes played,” he explains.

He’s gained the admiration of the world’s top guitarists from Jeff Beck to BB King and led to a myriad of major appearances including Eric Clapton’s Crossroads, the Montreal Jazz Festival and Tokyo’s Fuji Rock Festival. Johnny is touring behind his fourth album, “Driven” which was released in June 2014 and once again is garnering critical acclaim. 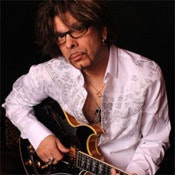