The Guitar duo of JULIAN LAGE and CHRIS ELDRIDGE is a collaborative effort founded in the roots of acoustic music, exploring the worlds of improvisation and composition. Born on Christmas Day 1987, Lage was raised in the Bay Area, where he was recognized early on as child prodigy. He became interested in the guitar at the age of 4, which inspired his father to take up the instrument. The two began playing together, learning the ins and outs of improvisation and exploring various musical genres, beginning with the blues. Lage’s chops evolved quickly, and he became the subject of the documentary Jules at Eight, which was nominated for an Academy Award. At 8, Lage was also asked to sit in with Carlos Santana. He made his debut on record at age 11, on David Grisman’s album Dawg Duos. Chris Eldridge has been at the vanguard of acoustic music for much of the past decade. Although initially drawn to the electric guitar, by his mid-teens Chris Eldridge had developed a deep love for acoustic music, thanks in part to his father, a banjo player and founding member of the seminal bluegrass group The Seldom Scene. Eldridge has worked with a diverse cast of musical luminaries including Jon Brion, Fiona Apple, Paul Simon, John Paul Jones, Marcus Mumford, Justin Timberlake, T-Bone Burnett, Elvis Costello, Jerry Douglas, Sara Watkins, Del McCoury and others. With Lage’s background in modern jazz and new music, and Eldridge’s deep relationship with bluegrass as well as his being a member of the widely acclaimed band, Punch Brothers, this duo lives at the nexus of improvisation, spontaneous composition, and virtuosic refinement, all performed on their respective 1939 Martin guitars. 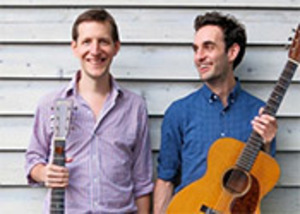