With his unique voice, more unique song writing, and even more unique double necked “Guit-Steel” guitar, there has absolutely never been ANYONE like Junior Brown. He’s the American Original. Born in 1952 in Cottonwood, Arizona, Junior Brown showed an affinity for music at an early age when the family moved to a rural area of Indiana near Kirksville. In the following years, Junior began to experience Country music and remembers it as “growing up out of the ground like the crops – it was everywhere; coming out of cars, houses, gas stations and stores like the soundtrack of a story, but Country music programs on TV hadn’t really come along much yet; not until the late fifties.”

Discovering a guitar in his grandparent’s attic, he spent the next several years woodshedding with records and the radio. Junior was also able to tap into music he couldn’t hear at home which older, college aged kids were listening to. This was possible due to his father’s employment at small campuses throughout the next decade as the family moved twice again. As a young boy he was able to experience the thrill of performing before live audiences, at parties, school functions even singing and playing guitar for five thousand Boy Scouts at an Andrews Air Force Base jamboree; then while still a teenager, getting the chance to sit in with Rock and Roll pioneer, Bo Diddley. Armed with this broad spectrum of influences, he began to develop a storehouse of musical chops.

There is a dependable consistency in Junior’s writing style (he writes nearly all his material) yet he’s always full of pleasant surprises. Though Junior always knew he could sing and play what he wanted, he had yet to explore his potential as a songwriter. “I realized no one was going to walk into a club and discover me…so I started hanging out with some songwriters who I’d played some jobs with, and they showed me how to support myself by writing and publishing.” With his writing coming together by the mid-Eighties, Brown upgraded his gear in a way that no artist had ever done. Struggling through each show, going back and forth plugging and unplugging guitar to steel guitar while singing, he had a dream one night about the two instruments mysteriously melding into one.

The result was Brown’s unique invention, the “Guit-Steel”, a double necked instrument combining standard guitar with steel guitar. Built by Michael Stevens of Stevens Electric Instruments, the Guit-Steel allows Junior to switch instruments quickly in mid song while singing. According to Brown, his guitar and steel guitar playing became more his own around this time, with less imitation of others and more his own original ideas and licks. This maturation coincided with the development of a completely “Junior Brown” style of songwriting which employs subtle dry wit to some songs – others can be more overtly humorous, or just plain dead serious; like his playing, there is a wide range of styles that when combined can only spell Junior Brown. 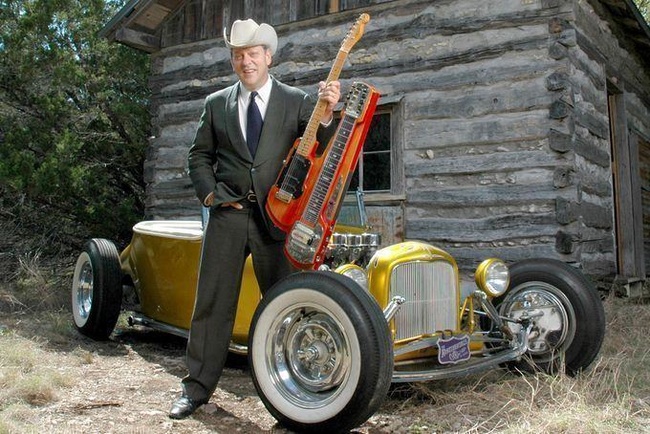