A great double featuring two of the finest singer songwriters on the contemporary Americana scene today.
With his rugged Midwestern sensibility and rich, evocative voice, Jeffrey Foucault is a songwriter in the tradition of the classic American country-folk troubadours. Foucault emerged in 2001 with the stark and compelling Miles from the Lightning. Following a 2003 trio album with wife Kris Delmhorst and Milwaukee songwriter Peter Mulvey, the Wisconsin native went on to release a pair of acclaimed solo LPs for the Signature Sounds label (2004’s Stripping Cane and 2006’s Ghost Repeater) before recording a 2009 tribute album of John Prine’s songs.

A year later he began a collaboration with Boston-based poet Lisa Olstein, resulting in the debut of his first full-band project, Cold Satellite. Cold Satellite’s 2010 debut introduced a sound that was more electric and rock-based than the country and folk of his previous albums. Folding traces of Appalachia and dark blues into his pastoral Americana, he returned in 2011 with Horse Latitudes, his fourth solo album of original material. A second Cold Satellite release, Cavalcade, arrived in 2013, after which Foucault began a foray into production, helming albums by Hayward Williams, Caitlin Canty, and John Statz. He returned to his solo career once again in 2015 with Salt as Wolves, the first release on his own BlueBlade label. The album heavily features drummer Billy Conway (Morphine), with whom Foucault began a musical partnership in 2013.

Kris Delmhorst grew up in Brooklyn NY, but her musical home is in Boston MA where she cut her teeth on open mics, bar gigs, and subway busking before embarking on her life as an internationally touring songwriter. She has released six albums on respected indie label Signature Sounds. Delmhorst now lives in the hills of western Massachusetts with her husband, songwriter Jeffrey Foucault, with whom she occasionally performs as part of the collective Redbird. 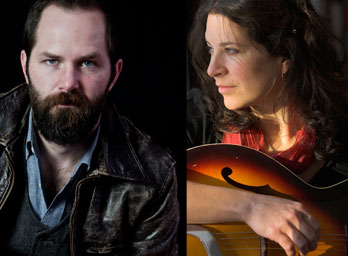