A writer for the San Diego Troubadour described guitarist and songwriter Kelly Joe Phelps as, ‘The Phantom Monk Of Folk- Blues,’ and rightly so. Throughout his 18 years on the road and 8 solo CD releases, Phelps has been talked about as much for his passionate, spirit-driven, solitary musical ways as for the inventiveness of his playing and singing. A New York Times concert reviewer wrote: ‘…his airy playing conjuring a pocket of supernatural space. He manipulated his fretboard to create eerie harmonics as he slipped from a mumble to a falsetto, as if to follow the soul beyond the physical realm.’ Uncut Magazine, reviewing a London show, wrote: ‘…to ripple and snake into unknown territory for the country blues he allegedly played, to squeeze out sounds touching the searching jazz that had once been his trade, to mutate through more layers than twelve strings should hold. And the songs; their pleas for mercy beyond the grave healed the spirit in ways disbelievers, in Bibles or Blues, could feel.’ 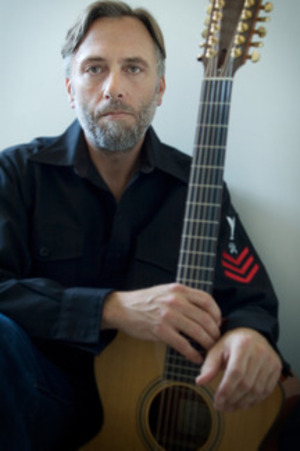