Keystone Revisited was bought together because of the huge demand from fans to hear more music from the originators of the so-called ‘Jam Band.’ When Merl Saunders and Jerry Garcia got together it was pure magic. They were in these groups; Merl Saunders and Jerry Garcia, Reconstruction and Legion of Mary, which were at the forefront of the jam band era. What better way to pay homage to these legendary players than by having BILL VITT who played with Merl and Jerry, TONY SAUNDERS, the son of Merl, who started playing with them when he was 18 and continued to play with them both doing other projects and Jeff Pevar who has played with Phil Lesh and Friends and Jazz is Dead. The album will be performed in it’s entirety as well as selections from the Dead, Legion of Mary and other Garcia solo material. 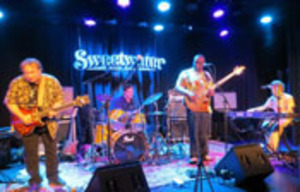