Kim Lenz and the Jaguars

The titian-haired, vivacious Los Angeles-based singer-songwriter-guitarist established herself as the top modern rockabilly songstress with a pair of widely praised albums for Hightone Records and rapturously received performances across the States and in Europe; Rolling Stone raved, ‘If Elvis had been a woman, he probably would have sounded just like Kim Lenz.’ After a recording and performing hiatus that left fans panting for her return, Kim is back in the groove with her best recorded work yet, the album It’s All True, which she produced herself and is releasing on her own Riley Records imprint. The new collection is a flaming slab of fuel-injected contemporary rockabilly that handsomely shows off Kim’s sass, energy, and romp-stomping vocal chops. It secures her position in the small pantheon of great female rockabilly singers that includes Wanda Jackson and the late Janis Martin ‘ singers with whom Lenz has shared many a stage. And it displays the genre’s diversity and impact. 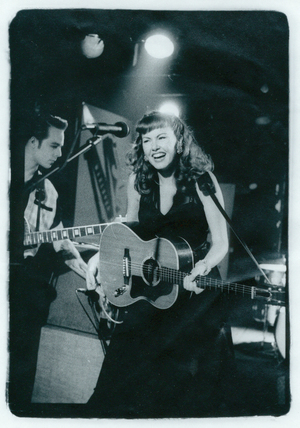