King Wilkie and The Parkington Sisters

The Wilkie Family Singers is the latest chapter in the saga of King Wilkie, a band who has made a career of defying expectations and continually reinventing itself. Now based in New York City, Burgess has enlisted a diverse group of collaborators to bring The Wilkie Family Singers to life. ‘When I came to New York, I was pretty desperate to get this album made. I started writing the record during the sessions for our second album, Low Country Suite, so these songs had been in progress for a couple years.’ Co-producer, multi-instrumentalist, and vocalist Steve Lewis and longtime King Wilkie collaborator Johnny McDonald were in early on, while Burgess actively sought additional players from his new hometown. The Parkington Sisters take the stage, as one reviewer noted, ‘like a force of nature’.a pure celebration of what we love most about music.’ Violins, cello, piano, mandolin, and guitar are the core of the group. The sisters share lead vocals, with up to five-part harmonies. All are songwriters, influenced by a wide range of musicians: Stravinsky to Edgar Meyer, Joni Mitchell to St??phane Grappelli, The Pixies to Aretha Franklin. These tastes, filtered through their classical training, have produced a sound that is undeniably their own: songs with vibrant string arrangements, warm, interwoven harmonies, improvisation and voices that blend like only sisters can. Renditions of Radiohead’s ‘High and Dry’ or Piazzolla’s ‘Libertango’ show an exceptional talent for rich, dynamic arrangements. 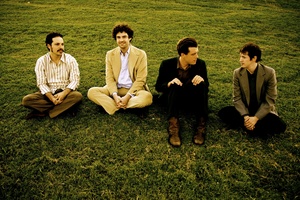