America’s Jewish Troubadour, Kinky Friedman, is described as Mark Twain meets Groucho Marx . . . at the corner of Johnny Cash and Lenny Bruce. He’ll also be carrying books, posters and music, surely enough for anyone. The Kinkster, who has just wrapped up a highly anticipated new book with Billy Bob Thornton titled The Billy Bob Tapes, and who has started writing one with Willie Nelson, will will sing all the tunes for which he is famed, including ‘They Ain’t Makin’ Jews Like Jesus Anymore,’ and ‘Ride ‘Em Jewboy,’ and, naturally, he will continue his long-running commentary on current politics and the state of the union, as well as give a book reading. An official signing party will follow each show; Kinky vows he ‘will sign anything but bad legislation.’ As thousands of folks have discovered or rediscovered over his last tours, Kinky Friedman is the real deal, an amazing performer, and one of America’s brightest literary lights. Kinky Friedman is the troubadour of our times, with a show for the ages. He will be touring in support of his new cd Wandering Star. Guest artists on the CD: Willie Nelson and Micky Raphael. 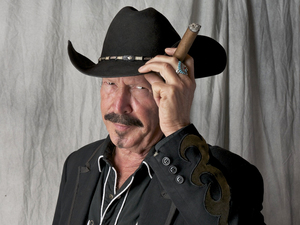