Legends of Music: Images from the Golden Age of Rock

Richard McCaffrey was a US Army Photographer in 1964-65. After graduating from Franklin Institute of Boston in 1967, he worked as a commercial photographer in Providence. He opened his own photography studio in 1969 and was successful with several major regional clients including Speidel Watchbands, Bostitch Staplers, Hasbro and Texas Instruments. In 1971 he founded an early alternative newspaper in RI called ‘The Point’ which covered the local and national cultural issues of the time. A significant part of the paper was devoted to art and music, which inspired the start of Richard’s career as a photographer in the music industry. Richard moved to the San Francisco Bay area in 1974. During the 1970’s & 80’s he free-lanced for magazines including Rolling Stone, Billboard, Guitar Player and many other publications. He was Chief Photographer for BAM (Bay Area Music – The California Music Magazine) from 1975 to 1986 and also worked with concert promoters, bands and record companies. From 1980 thru 1987 he was co-founder and board member of ‘Eye Gallery’ a non-profit photo gallery, community lab and studio in the Mission District of San Francisco and was Board Chairman from 1982-84. Richard returned to Rhode Island in 1991 where he became the staff photographer for The Providence Phoenix until 2014. He is currently a contributor to Motif Magazine and Go Local Prov. Richard McCaffrey has co-authored two photographic books on the music industry and several on other subjects. He is represented by Getty Images and his photographs appear in numerous local, national and international books, publications and on several albums and CD’s. Richard McCaffrey lives in Providence, Rhode Island. An artist reception will take place on Saturday, September 19th from 1:00 – 3:00 pm. Admission is free. The public is cordially invited. 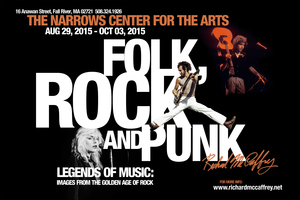