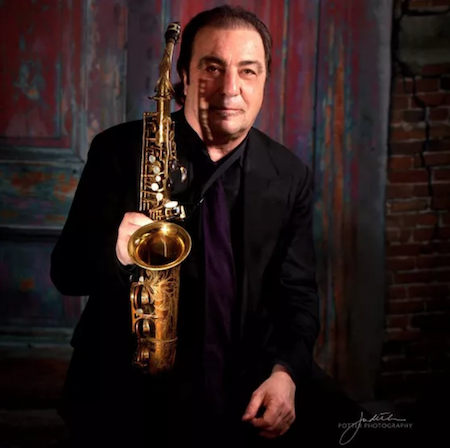 RI-based Greg Abate is known the world over as a master of the alto saxophone and a hard core bebopper, but he does much more.

He is also proficient on the soprano, tenor and baritone saxes, as well as the flute. He is also a respected composer; some of his 17 CDs consist of only his own songs, while others feature standards along with his own pieces.

Greg is one of a diminishing number of jazz artists who travel the world non-stop, often more than 225 days a year, performing in clubs and at festivals, giving clinics at schools and colleges and regularly releasing highly regarded and reviewed recordings which make the top 20 on the JazzWeek national radio chart. In 2016 he was inducted into the RI Music Hall of Fame.

Greg and his quartet of veterans will be playing a mix of jazz standards, his own compositions, and a few numbers from his recently recorded and upcoming release, “Greg Abate Plays the Music of Kenny Barron.”

Few performers can sustain that ‘fire in the belly’ intensity that energizes audiences and bandmates alike, night after night, and Greg never fails to make that happen. Always aiming for the deep seats, he embodies the joy, striving and beauty that bring the jazz audience back year after year to appreciate his music, and he always delivers.

Greg will be joined by Ben Cook on piano, Todd Baker on bass, and Gary Johnson drums.