When members of the Los Straitjackets say their new record, The Further Adventures of the Los Straitjackets, is ‘all over the place,’ they certainly mean it. From the raunchy romp of album opener ‘Cal Speed,’ the hand clap boogie of ‘Fortune Cookie,’ the woozy vibrato of ‘Catalina’ and on through to the flirtatious whimsy of ‘Noctural Twist’ – loosely inspired by the 1930s-era jazz standard ‘Harlem Nocturne’ – the new record is a return to form for the band. After spending the last couple of years making records with Kaiser George (Twist Party) and Cesar Rosas of Los Lobos, rockabilly belter Big Sandy, and East L.A. legend Little Willie G. (Rock En Espanol Vol. 1) the band found itself missing doing what it does best – and that’s making straight up instrumental rock and roll. ‘It’s definitely heavier – more garage-y than our other records,’ says guitarist Danny Amis. ‘It’s definitely a little more of a punk record than before. I think it’s reflective of the fact that we needed to get back to that.’ To write and record the new album – its first record of original instrumentals since 2003’s Supersonic Guitars in 3-D – the band spent a lot of time listening to its heroes, including Link Wray, and the Ventures. In addition to those artists, guitarist Eddie Angel listened to other bands that may be less likely to be associated with the Los Straitjackets, including Led Zeppelin and The Cramps. He described the process of listening to records for inspiration adding, ‘Then we drank a lot of scotch, also for inspiration.’ ‘We never try to be meaningful,’ Angel says. ‘We’re an anecdote to that. Our goal is to bring fun to the party.’ 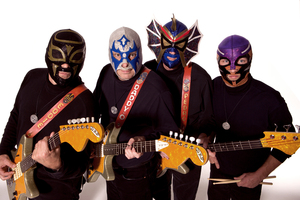