His time with the Black Crowes, including a second stint in the mid-2000s, are so well documented as to need little repetition here. Except for Ford to say that he can look back on his musical passage with them, and on all of his other stops along the way, with real satisfaction. ‘I’m proud of all the music that’s been made,’ he says. ‘I think that stands, and the Crowes was a fantastic band. Ben Harper’s music was great, ‘There Will Be A Light’ [on which he plays, as he does the later ‘Both Sides Of The Gun’] is a fantastic record. Ryan Bingham, I heard at a club at one in the morning and it was like ‘Please let me record you.” He did so, for Bingham’s lauded Lost Highway albums ‘Mescalito’ and ‘Roadhouse Sun.’ MARC FORD is one of the most gifted, celebrated and in-demand rock guitarists of his generation has switched gears to deliver what will undoubtedly stand as one of the finest Americana albums of 2014. ‘Holy Ghost’ has plenty of space for Ford to demonstrate that his guitar sorcery is as powerful as ever. But it’s textured in a different setting that will also delight a legion of admirers who never knew he could embrace the wide open spaces of American roots music so brilliantly. 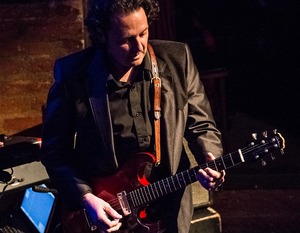