Benevento is riding a creative surge. Proof in point is the 30-year old keyboardist’s debut studio album Invisible Baby, scheduled for release February 12 on HYENA Records. The collection proves Benevento a sonic innovator in peak form, defying boundaries and blasting through genres to carve out his own universe. Invisible Baby was recorded in a trio configuration with Benevento joined by bassist Reed Mathis (Jacob Fred Jazz Odyssey) and drummers Matt Chamberlain (Tori Amos) and Andrew Barr (The Slip). Having earned a multitude of young fans and critical acclaim for his visionary electric keyboard work as one half of post rock instrumentalists The Benevento/Russo Duo, here Benevento utilizes acoustic piano as his main voice. His instincts, however, for arranging sound in fresh and unexpected ways remain firmly intact. On Invisible Baby’s eight original compositions, Benevento runs his piano through projector amps and Leslie speakers, coloring the tracks with Mellotron, Speak N Spell, banjo, a vintage church pump organ and all sorts of circuit bent toys which have become his trademark. 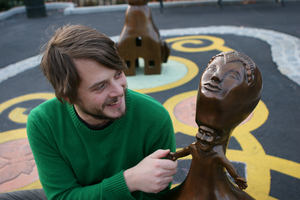