Over 25 years since breaking through to critical and commercial acclaim with his 1982 self-titled debut and its infectious, era-defining pop hit ‘Someday, Someway,’ Marshall Crenshaw creates an incredible new chapter in his career with his 429 Records debut Jaggedland. Crenshaw’s first studio recording in more than six years is his most musically dynamic and lyrically intimate collection yet. Classic Crenshaw attributes including an indelible sense of melody and tuneful essence combine to create a rich warmth and intimacy on every song of Jaggedland. The recording has a powerful vibe of immediacy thanks to Crenshaw’s warm vocals and riveting guitar work. He takes the production to its highest levels working with a roster of well known musical heroes and veteran producers. Crenshaw first recorded two tracks in Upstate New York with Stewart Lerman (The Roches, Dar Williams), the melancholy ‘Sunday Blues’ and the fiery rocker ‘Someone Told Me.’ Crenshaw did seven of the tracks at Sage and Sound Studios in Los Angeles with producer/engineer Jerry Boys (REM, Richard Thompson, Buena Vista Social Club), who had been his ‘wish list’ since he heard the Mambo Sinuendo album Boys engineered for Ry Cooder and Cuban guitarist Manuel Galban in 2003. Highlights of these West Coast sessions are ‘Passing Through,’ the hopeful ‘Eventually’ and the powerful ‘Long Hard Road.’ The album title Jaggedland is a term Crenshaw says best describes the current state of his brain and consciousness. Simply put, the 12 songs are musical observations about the human experience, mortality, the state of the world and of course, love as viewed through the inimitable Crenshaw perspective. The sessions involved key contributions from legendary drummer Jim Keltner (whose credits include The Beatles, Rolling Stones, Bob Dylan, Eric Clapton, Brian Wilson and Joni Mitchell); guitarists Greg Leisz (Lucinda Williams, Robert Plant) and the MC5’s Wayne Kramer as well as legendary vibraphonist, Emil Richards (Beach Boys’ Pet Sounds, Frank Sinatra). 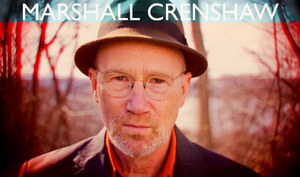