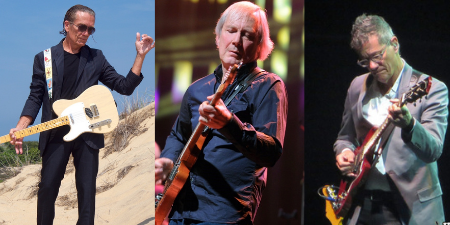 GE SMITH was the music Director and led the Saturday Night Live (SNL) band for 10 years. During this time he also toured with Bob Dylan for four years. He also helped Mike Myers write a song for Aerosmith for when they performed on SNL. GE Smith was sought out by major recording artists like Jagger, who, shortly after Live Aid, called Smith to work with him on his first solo album, She’s the Boss.
http://gesmithmusic.wordpress.com/

Jon Herington is a bandleader in his own right and has enjoyed a great deal of success with the Jon Herington Band. However since 1999 he’s been the guitarist of choice for the iconic band Steely Dan for both recording and touring. Herington has also played with the likes of Donald Fagen, Boz Scaggs, Bette Midler, and others. http://www.jonherington.com/bio.html