In music there are those special artists that seem to transcend genre and defy categorization. From time to time one hears a voice that can stop you dead in your tracks and shake your very foundation to the core. Mike Farris is that artist and he has that voice. In June of 2007 Farris released the critically acclaimed Salvation in Lights which married old time roots gospel sounds with his own unique arrangements that were mainly inspired by New Orleans, Stax and the blues. The music was both spiritual and personal for Mike as it dealt with individual struggle but it also had a commonality that music fans from all walks of life could enjoy. In 2008 he won the Americana Music Association\’s ‘New & Emerging Artist of the Year’ award and started to make a name for himself as a dynamic performer. In 2008 and 2009 Mike Farris and his Roseland Rhythm Revue performed monthly residencies at Nashville’s’ Station Inn and called it ‘Sunday Night Shout!’ The shows had audiences that consisted of people from all walks of life and the goal was to make the crowd feel ‘excited, delighted and loved.’ The official live recording of the Station Inn shows, Shout! Live, was released in 2009 and won the Gospel Music Association’s Dove Award for ‘Best Traditional Gospel Album of the Year’ in 2010. When the ‘1,000 year flood’ hit Middle Tennessee in May of 2010 it became obvious to Mike that he needed to do something to help those who were affected. He gathered up some of the finest musicians in town including: Sam Bush, Ketch Secor & Gill Landry (Old Crow Medicine Show), Kenny Vaughan (Marty Stuart), Byron House (Robert Plant) and members of his Roseland Rhythm Revue. Six songs were recorded in 6 hours at Nashville’s Downtown Presbyterian Church and the music was a beautiful blend of old time country, gospel and blues with Mike leading the ‘Cumberland Saints’ from the pulpit. In October of that year the EP was released as The Night The Cumberland Came Alive with partial proceeds donated to the Community Foundation of Middle Tennessee. With recording near completion on his next solo project, Already Alright, Mike Farris continues to amaze audiences whenever he plays solo or with any one of his different configurations from the stripped down Cumberland Saints to the full 9 piece Roseland Rhythm Revue. His voice connects and mesmerizes in such a way that it doesn’t matter if the songs are his own compositions or ones sung 200 years ago. As Mike puts it ‘this music – it’s so beyond us, we only perpetuate it. We are just cooks in the kitchen.’ If so Mike Farris is one ‘cook’ with an immediate voice. 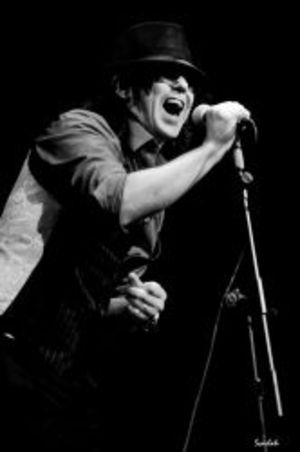