The natural habitat of the true musician is not the gleaming studio, a glitzy showbiz party or a five-star hotel. It’s the road. And if multiple Blues Music Award winner Mike Zito had a dollar for every mile of tarmac he’s burnt since his breakout in the early-’90s, they’d be piled up to his chin. ‘There’s just something in me,’ considers the solo bandleader and Royal Southern Brotherhood co-founder (with Devon Allman and Cyril Neville), ‘It’s there in all musicians. You gotta love the road to be a part of this world. You’re right there, looking in people’s eyes, swapping stories, shaking hands” There’s an undeniable romance about a life in motion ‘ and an enduring magic about the moment when the house lights go down, the roar of the crowd goes up and the shadows take the stage. For Mike, who began touring the Midwest circuit at the age of eighteen, and has since crossed twenty-plus countries as guitarist with the Brotherhood, this is when things get serious. ‘In my band, The Wheel, if you’re not already with us, you’d better get on board,’ he grins. ‘Because otherwise we’re gonna knock you down!’ 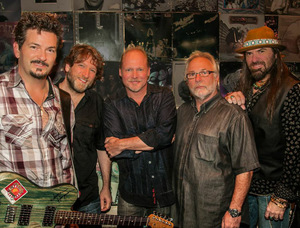