This year Diamond releases their sophomore album, A Thousand Shark’s Teeth, originally meant to be a more classical, string quartet affair, the work slowly evolved and refined itself over a period of six years. Influenced by artists such as Tricky, French composer Maurice Ravel and Tom Waits, in addition to the star exploration themes of Anslem Kiefer’s paintings, the imaginary landscapes of photographer Robert ParkeHarrison, films by Jean-Pierre Jeunet, and Alice in Wonderland, A Thousand Shark’s Teeth is a musical snowglobe that sparkles each time you touch it. The songs, whose themes broach intimacy, kisses by moonlight, laundry, lost friendship and more, marry vast instrumentation ‘ marimbas, harps, clarinets, French horns, rabid guitars, vibraphones to name a few ‘ to create an unequaled amalgamation of style and color. A Thousand Shark’s Teeth was released in Europe on June 2nd and in the US on June 17th, 2008 on Asthmatic Kitty Records 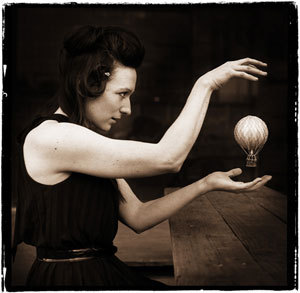