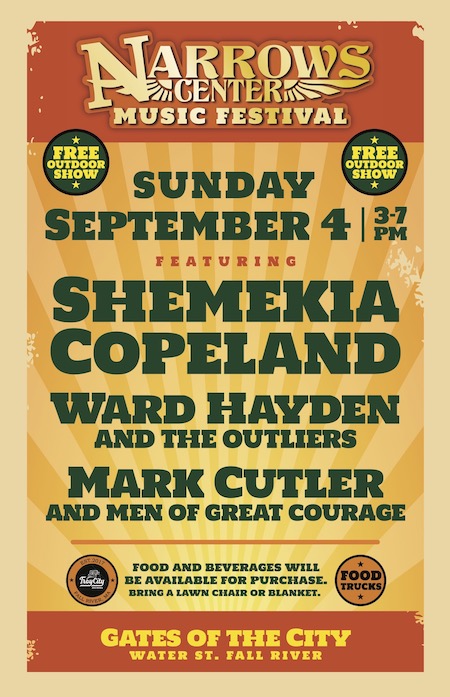 – Food and beverages can be purchased from Troy City Brewery and a variety of food trucks
– Bring a lawn chair or blanket!

Award-winning blues, soul and Americana singer Shemekia Copeland possesses one of the most instantly recognizable and deeply soulful roots music voices of our time. She is beloved worldwide for the fearlessness, honesty and humor of her revelatory music, as well as for delivering each song she performs with unmatched passion. Copeland — winner of the 2021 Blues Music Award for B.B. King Entertainer Of The Year— connects with her audience on an intensely personal level, taking them with her on what The Wall Street Journal calls “a consequential ride” of “bold and timely blues.” NPR Music says Shemekia sings with “punchy defiance and potent conviction.” The Houston Chronicle describes her songs as “resilient pleas for a kinder tomorrow.”

Ward Hayden & The Outliers (formerly Girls Guns & Glory) formed as a way to break from the music so commonly found on popular radio airwaves. Hayden’s foray into country music and early rock ‘n’ roll began with a fateful borrowing of a few of his mother’s cassettes. When asked, Hayden remarks, “I was doing these long drives and there was nothing appealing to me on the radio. I was twenty years old at the time and had been through my first experiences with heartbreak and loss. When I put some of these cassettes on the player in my Oldsmobile Delta Eighty-Eight, all I could think was, “this is everything I’ve been searching for.”
Since their formation they’ve barnstormed far beyond their Boston hometown, playing honky-tonks, beer joints and more recently concert venues throughout the U.S. They’ve amassed a loyal legion of fans along the way. The media have noticed too, including Rolling Stone, which heralds them as a “modern-day Buddy Holly plus Dwight Yoakam divided by the Mavericks.”

Mark Cutler is a singer/ songwriter/ guitarist from Providence, RI. He has shared the stage with such acts as Bob Dylan, Warren Zevon, Little Feat and was founder of Boston band ‘The Raindogs’ and RI band ‘The Schemers’. Mark now performs solo and with various outfits in the New England area. His music can be dark and jangly, delicate and then rocking. He will play anywhere people want him to play and sometimes even where some folks don’t want him to play.