The guitar duo of Nels Cline and Julian Lage features compositions by both players, along with a healthy amount of spontaneous improvisation. Those familiar with Cline\’s work may be surprised to hear him play without effects pedals or looping devices; those familiar with Lage’s work may be surprised to hear him play totally ‘free’ improvisation. The degree of creative empathy as these gentlemen create spontaneous structure is as dramatic as their compositions are original. Cline and Lage approach and pay homage to the syntax of jazz, while pushing the music into remarkable, new territories. Guitar master-explorer NELS CLINE should need no introduction having held the guitar seat in Wilco for nearly 9 years and counting. His recording and performing career – spanning jazz, rock, punk, and experimental – is well into its fourth decade, with over 130 recordings, including at least 30 for which he is leader. Accolades include Jazz Times declaring Cline ‘the world’s most dangerous guitarist’ and Rolling Stone proclaiming him to be one of 20 ‘new guitar gods’ and one of the top 100 guitarists of all time. Beyond Wilco, he leads The Nels Cline Singers and has played or performed with Tim Berne, Jim Black, Yoko Ono, Vinny Golia, Julius Hemphill, Charlie Haden, Scott Amendola, Wadada Leo Smith, Lydia Lunch, Thurston Moore.. the list is endless! JULIAN LAGE has toured and recorded with Gary Burton, Jim Hall, Fred Hersch, Bela Fleck, Mark O’Connor, and many more. Originally from the Bay Area, Julian has released two critically acclaimed albums as a leader including Sounding Point and Gladwell. Sounding Point was nominated for a Grammy Award and DownBeat Magazine recently named Julian a ‘Rising Star Guitar’ winner. 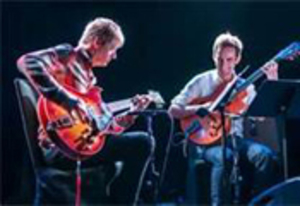