Nels Cline is a major force as a guitarist and improviser, ever since he debuted on record in 1978 and as a leader in 1988. Named by Rolling Stone as one of 20 ‘new guitar gods’ and one of the top 100 guitarists of all time, Cline has gained his widest fame as a member of acclaimed rock band Wilco since 2004. He’s known for a certain cranked-up experimental mayhem, the kind sometimes heard from his extraordinary trio the Nels Cline Singers, which released the well-received MACROSCOPE on Mack Avenue earlier in 2014. But throughout his career, Cline has undertaken projects, sometimes acoustic or semi-acoustic duos, highlighting an intimate and reflective approach that’s just as central to his artistry. With ROOM, Cline returns to Mack Avenue, creating a world of melodic beauty but also hard sonic edges and technical brilliance in the company of Julian Lage. At just 26, Lage has taken the world of jazz guitar by storm. The New York Times hails the ‘disarming spirit of generosity’ in Lage’s music and notes the young guitarist’s ‘roots tangled up in jazz, folk, classical and country music.’ In addition to his work with Mark O’Connor, the late Jim Hall, Anthony Wilson and a great many others, Lage leads his own groundbreaking groups as documented on the albums Gladwell and Sounding Point (the latter earning Lage a Grammy nomination). In a 2013 Q&A with JazzTimes, Lage described the Cline-Lage duo sound as ‘200 percent power,’ and that’s exactly what comes through on ROOM: an inspired collection of originals and collaborative pieces that run the full range from intricately composed and complex to free and spontaneous. Cline builds on the strength of his previous duo work with the likes of Vinny Golia, Zeena Parkins, Elliott Sharp, Thurston Moore, Carla Bozulich, Marc Ribot and not least of all the late West Coast bassist Eric Von Essen, to which the gorgeous dual-acoustic showcase ‘Whispers from Eve’ is dedicated. Lage, for his part, has worked in duo settings with David Grisman, Martin Taylor, John Abercrombie, Taylor Eigsti and others. Cline and Lage remain on acoustic guitars to end ROOM with ‘Calder,’ a reference to the visionary sculptor Alexander Calder. ‘I have a Calder mobile that my mom sent me years ago when I moved back east,’ Lage says. ‘It hangs in my apartment and I just love it. So though I wrote the tune first and the title came later, I felt like the presence of the mobile fit the mode of the piece well.’ On ROOM one hears two guitar masters who span the generations, comfortable in every conceivable role, meeting the daunting challenges of these compositions while giving themselves over to the moment. In the JazzTimes Q&A, Cline credited the duo for revitalizing his playing overall: ‘I was burned out on touring, burned out on myself’. And when Julian and I started playing together it kicked my ass hard. At the same time it inspired me and refreshed my soul.’ Lage replied, ‘Likewise.’ 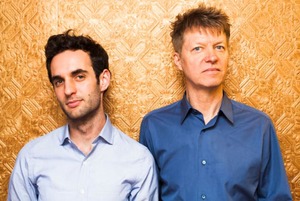