OUT OF ORDER
(Narrows Gallery)


Look around: our world just doesn’t make sense much of the time. Although we strive for order, rules are constantly broken and systems fail. Despite the fact that we constantly crave and purchase the latest shiny new gadgets, everything eventually breaks down and gets tossed in favor of the next hottest thing. Even human beings in this culture are disposable: those who are sick, elderly, or different are pushed to the sidelines.

Whether appropriating things that are broken or dejected, examining systems that have failed or are out of kilter, or celebrating that which is off-center or misaligned, each of the artists in this exhibition explores the concept of ‘Out of Order’ from a unique perspective. Rather than thinking about ‘Out of Order’ as a sign of something not working, instead these six Massachusetts artists embrace the asymmetrical, the worn-out, and the sidelined and offer alternative perspectives on our complex world. 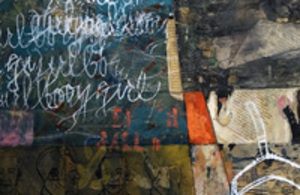