Playing For Change is a movement created to inspire, connect and bring peace to the world through music. In 2005, co-founders Mark Johnson and Whitney Kroenke created the concept of the Songs Around The World by uniting together musicians from many different countries and cultures to perform on the same track. Mark and a small crew traveled across 5 continents with a mobile recording studio and cameras with the vision of building a global family through the power of music. The first song released was a version of ‘Stand By Me,’ featuring over 35 musicians from 10 countries who had never met in person. Since then, this international version of ‘Stand By Me’ has been viewed over 100 million times online. Since the release of the first video, Playing For Change has sold over 550,000 units worldwide, topped the World Music Charts, and has had over 200 million online video views. The video for Maroon 5’s ‘Daylight’ topped the VH1 and MTV top video countdowns. Playing For Change has been featured in a diverse range of national print and TV media including NPR, Rolling Stone, Paste Magazine, LA Times, and The New York Times. The band has also performed on The Colbert Report, The Tonight Show with Jay Leno and Conan (twice). In September of 2013, the Playing For Change Band performed the song ‘A Better Place’ at the United Nations after showing our video to a standing ovation of delegates and Presidents/Prime Ministers from around the world. They have also toured throughout 4 continents for over 150 performances, playing in massive arenas including theHollywood Bowl in Los Angeles, England’s Glastonbury Festival, Bourbon Street Festival in Brazil and Byron Bay Blues Festival in Australia. The PFC band also toured as a support act for Robert Plant in 2013 throughout Australia and they will be hitting the road again in 2014. The Playing For Change Band includes: Grandpa Elliot of New Orleans, Louisiana (vocals, harmonica); Clarence Bekker of Amsterdam, Netherlands (vocals, acoustic guitar); Titi Tsira of Guguletu, South Africa (vocals); Tal Ben-Ari aka Tula of Tel Aviv, Israel (vocals); Jason Tamba of Matadi, Congo (vocals, guitar); Mermans Mosengo of Kinshasa, Congo (vocals); Keiko Komaki of Kagoshima, Japan (keyboards); Peter Bunetta of Los Angeles, California (drums); Louis Mhlanga of Zimbabwe (flying guitar); and Orbe Ortiz of Santiago de Cuba, Cuba (bass). 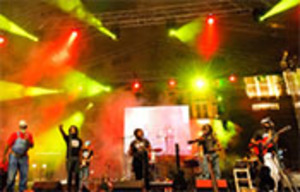