Professor Louie and the Cromatix 2/19/16

Professor Louie’s upstate ensemble is an old school Americana template that jams out timeless rock, country, blues and New Orleans influenced originals.’ – Village Voice This GRAMMY-nominated Woodstock, NY band plays 150 shows every year in the US and worldwide. Led by recording engineer and producer, Aaron ‘Professor Louie’ Hurwitz on vocals, keyboards and accordion, The Crowmatix repertoire is steeped in rock ‘n’ roll, blues, Gospel and American roots music, and features a compelling collection of original and traditional tunes. The band’s latest release, Music From Hurley Mountain (Woodstock Records, 2016), showcases music written by Louie and his songwriting partner, vocalist, pianist and percussionist, Miss Marie (Rick Danko). Drummer Gary Burke (Bob Dylan, Joe Jackson), guitarist/vocalist John Platania (Van Morrison) and bassist/vocalist Frank Campbell (Steve Forbert, Levon Helm) complete the talented and versatile quintet. Professor Louie & The Crowmatix have grown into a true legacy of Woodstock band. ‘Their new material is soulful and their performance last night (at Sugarloaf Performing Arts Center) was the highlight of the evening.’ – Stan Beinstein, radio executive (WPDH, WDST) & concert promoter Professor Louie & The Crowmatix began as the studio backing band for Aaron Professor Louie’s musical productions with the Rock and Roll Hall of Fame Inductees, The Band. Louie produced Jericho (1993), The Band’s first album of new music in 16 years, and their final group recordings, High on the Hog and Jubilation. The Crowmatix also worked on numerous solo recording projects and live performances with Rick Danko, Garth Hudson and Levon Helm. ‘Working with Rick, Garth and Levon for 15 years was a great honor ‘ and a lot of fun ‘ and we’re proud of the music we created together,’ says Louie. ‘Their love of crafting musical stories based on American history had a strong influence on us, and I like to think we’re continuing that tradition in The Crowmatix recordings.’ ‘All the best parts of great music are on display with Professor Louie & The Crowmatix. It’s clear these folks are driven to match the all time greats.’ – Cash Box Magazine 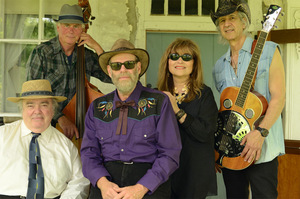