It wasn’t that long ago that Ray Wylie Hubbard allowed to an acquaintance that he wouldn’t mind being a hybrid of Guy Clark and John Lee Hooker. Now, I’m no seer or mystic, but my instincts suggest that wish came true. And then some. A. Enlightenment, B. Endarkenment (Hint: There is no C) confirms it. Ray Wylie Hubbard writes the kind of songs that make you want to ride along no matter where he’s going, because you know it’s gonna get strange somewhere along the way. The references to Muddy Waters being as deep as William Blake (‘I really do believe it,” Ray says) and lipstick pickups, resonator slides, the dreams of drunken poets, deceased call girls, opium, wasp’s nests, clouds growing a tail, his ability to segue seamlessly from primal exclamations of carnal lust into songs about salvation without pausing for irony; and a craftsmanship that manages to rhyme mescaline and gasoline and Volkswagen with dragon while painting vivid portraits of characters both real and unreal, all evoke a sense of place that is larger than life but in no way made up. Anyone who’s followed Ray Wylie Hubbard over the long and winding path he has traveled already knows he possesses the kind of exceptional gift for observation that any songwriter yearns for. His sense of wonder is tempered by an accumulated wisdom and knowledge that comes with experience that has elevated him into the Wylie Lama of Texas Music, freely imparting songwriting verities to all kinds of aspiring musicians, which allows him to lay all his cards on the table and let the listener decide what it all means. 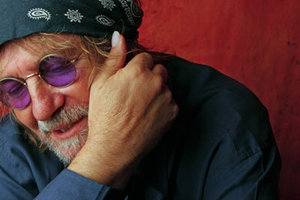