The career paths of bands with long and rich histories are akin to fingerprints; no two are identical. No such statement could be more appropriately applicable than to the forty-four year career of British progressive rock pioneers Renaissance. The band, acclaimed for their unique blending of progressive rock with classical and symphonic influences, can trace its’ origins back to 1969 when Yardbird founding members, Keith Relf and Jim McCarty left fellow band mates to organize a new group devoted to the experimentation between rock, folk, and classical forms. This quintet; Relf on guitar & vocals, McCarty on drums, plus bassist Louis Cennamo, pianist John Hawken, and Relf’s sister Jane as an additional vocalist, released a pair of ground breaking albums on Elektra and Island, but when touring began to grind on them, the band gradually dissolved one by one. Renaissance underwent several incarnations until 1971 when vocalist/lyricist Annie Haslam, guitarist/composer Michael Dunford, John Tout, Terence Sullivan and Jon Camp joined forces, propelling the band into the realm of successful world-class recording and touring status. After extensively touring and critical acclaim in the UK, Germany, Italy, Switzerland, Holland, France, Belgium, Portugal and Israel, influential rock stations in the US picked up on the band’s unique progressive/symphonic sound and introduced them to welcoming American audiences. The band spent years touring, recorded fifteen albums while gracing distinguished stages, from Carnegie Hall with The New York Philharmonic to the Royal Albert Hall in London with The Royal Philharmonic. Despite explorations into solo careers, and changes in the line-up over the years, the five octave ranged voice of Annie Haslam and brilliant musicianship of Michael Dunford remained the core of Renaissance. 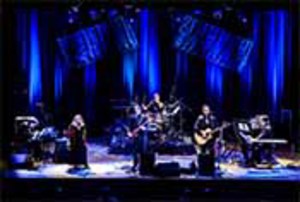