Rich Robinson (of the Black Crowes)

On the eve of the release of his third solo album, Rich Robinson, best known as the guitarist, songwriter, and founder of The Black Crowes, stands ready to complete the solo artist evolution that he began ten years earlier. The Ceaseless Sight, an album that represents the full maturation of Rich as a songwriter, a vocalist, and a solo artist. Robinson already has two solo studio albums to his credit, the first, Paper, came in 2004 while his follow-up, Through a Crooked Sun, arrived in 2011. ‘I’ve always approached writing songs for an album as part of a larger work,’ says Robinson. ‘The Ceaseless Sight as a whole is one piece and how it fits into my whole body of work is the other. My new record follows the path of my musical journey I’ve been on for 25 years. I feel a strong connection to where I’ve been musically, but more importantly where I’m going.’ Robinson was born in 1969 and formed the The Black Crowes with his older brother Chris in Atlanta in the 1980’s. At the age of 17, Robinson began writing the music for the songs that would land on the band’s 1990 debut album, Shake Your Money Maker, which sold 7 million copies. Over the next 10 years, Rich’s songwriting evolved into the musical engine that powered the band to sales of more than 25 million albums. Before taking a hiatus in 2001, the Crowes catalog included classics like The Southern Harmony and Musical Companion, Amorica, By Your Side, and Live at the Greek: Excess All Areas, a double album that captured the teaming of Jimmy Page and The Black Crowes for performances of Led Zeppelin, Crowes and blues and rock standards. 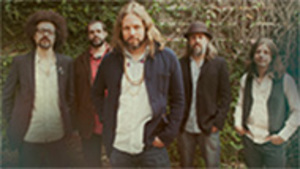