Rita dazzled the stage last night in her sparkling red jacket and black balloon pants. The up and coming artist from Portugal was invited by the Arte Institute to perform in the United States. The Narrows Center, with the help of Michael Benevides from the Portugalia Marketplace in Fall River, was honored to be a stop in her small tour.

Rita’s sound has been compared to American musicians, Regina Spektor and Ingrid Michaelson, but her personal style is completely her own. As a solo artist, Rita plays piano and guitar over looped beats she has recorded on her iPad. While the majority of her tunes were in English, she performed a few songs in Portuguese, which pleased the audience, confirming that music truly is universal.

Her set combined a few slower, dreamlike ballads with more upbeat tunes. One song was a cover of “Both Sides Now,” which was coincidentally performed the night before by the folk icon herself, Judy Collins. Rita saved her two catchiest tracks for the end of the show, including “I’m the Captain of My Soul,” in which the whole crowd was clapping along, and the encore of “Hey Tom.”

The most memorable moment, for me anyway, was her performance of “Choose Love,” which she introduced by saying, “This is a very emotional song for me so I dedicate it to all of you.” Her humble stage presence and gracious demeanor is what made the audience fall so easily in love with Rita Redshoes. 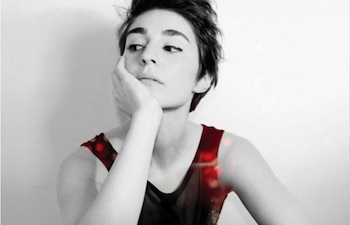