The 2013 New England Music and Cider Magazine Award Winners, Roots of Creation, mix roots and dub reggae with guitar-heavy rock and electronica, all wrapped around lead singer/guitarist Brett Wilson’s introspective and consciousness laden lyrics. The band is raising the bar at every performance with the intent of delivering a true rock show cleverly disguised as a reggae dance bash with psychedelic and energizing lights. The techno-beam and LED tube lighting increases the already high-energy sound that Roots of Creation (RoC) brings to their audiences. RoC’s newest release, Live at Bella Terra Festival (. . . And Stoned at Church), captures the band as a five-piece, during a 10 show tour, from the east coast to Chicago to Eastern Canada, in August 2011. The stop at Bella Terra in Stephentown, NY allowed RoC to perform a high- profile slot directly after the headliner, The Mickey Hart Band. As thousands of fans poured from the main stage over to the late-night tent, RoC delivered a truly unique music experience with thumping reggae bass lines, piercing guitar licks, and an electronic-dub sound only this band could create. RoC travels with their own lighting designer, who put on a show of techno beams and LED tubes to match the music and vibe of Bella Terra as lead singer Brett Wilson demanded the crowds’ attention with his soulful lyrics and revolutionary calls. 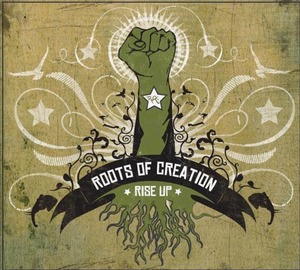