For The Sacred Shakers, there’s nothing finer than old-time, country and blues-influenced gospel music. Think Hank Williams, The Carter Family, The Stanley Brothers, Son House, and Mississippi Fred McDowell. Beginning in 2005, that music drew a small but ever-widening circle of some of Boston’s finest musicians and vocalists together at the Country Gospel Brunch concert series. In short order, The Boston Globe described the group as ‘a local Who’s Who of all-star roots musicians.’ And last summer, after hearing a single live performance by The Sacred Shakers, indie Signature Sounds label owner Jim Olsen encouraged the group to record their repertoire. On their eponymous debut, The Sacred Shakers offer new life to the gospel genre by revisiting the stripped down country and bluesy gospel material that inspires them. ‘Turn it all upside down,’ Zoe Muth sings on the opening track of her third full-length album, World of Strangers. ‘See the stars when we’re looking at the ground, shining all around.’ Muth brings us ten heartrending tales of the leaving and the left behind in her trademark style of infusing moments of despair with hope and levity. This time around she has made some changes, channeling a wider array of influences ranging from classic country ballads to early folk-rock. First making her name in the Pacific Northwest, where she’s been called ‘Seattle’s Emmylou,’ and heralded as one of the best songwriters to come out of Washington State, Muth spent the last three years touring across the U.S. and Europe. Playing bars and caf??’s as a young pre-school teacher, she saved up her minimum wage earnings and beer bucket tips to pay for her 2009 debut album, Zoe Muth and the Lost High Rollers. That album, along with her 2011 follow up, Starlight Hotel, went on to garner praise from the international press, and landed on No Depression’s ‘Top 50.’ 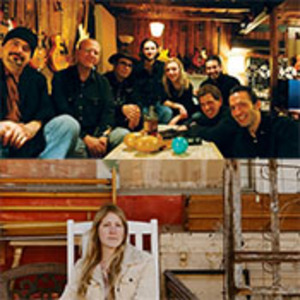