Sam Amidon & Glenn Kotche (of Wilco) This eclectic bill will feature 2 solo sets as well as a collaborative set of music. For a percussionist and composer as energetic, inquisitive and versatile as Glenn Kotche, it’s his sense of balance’his ability to thrive in different and seemingly disparate worlds’that really makes him stand out as a musician. Since 2001, Kotche has been the rhythmic anchor in Wilco, one of the most beloved rock bands on the planet. His first studio outing with the Chicago- based band was the breakthrough Yankee Hotel Foxtrot, and has continued over the course of five albums, including the Grammy-winning A Ghost Is Born and the critically acclaimed The Whole Love. He has appeared on over 80 recordings by artists as diverse as Andrew Bird, Edith Frost, Neil Finn and Radiohead’s Phil Selway, and he’s a founding member of two other bands’ Loose Fur, with Wilco frontman Jeff Tweedy and longtime collaborator Jim O’Rourke, and On Fillmore, with upright bassist Darin Gray. He has also written music for classical and post-classical ensembles like Kronos Quartet, the Silk Road Ensemble, the Bang on a Can All-Stars, So Percussion, eighth blackbird and many more. Unsurprisingly, Kotche has drawn the praise of his peers from all corners of the musical spectrum. ‘I could never find another drummer who was Glenn Kotche,’ Jim O’Rourke told Time Out Tokyo in 2013, ‘because there isn’t.’ In the program notes for Ilimaq, a piece written in 2012 specifically for Kotche, composer John Luther Adams observed, ‘…in the hands of a musician like Glenn, the drum set is a one-man percussion orchestra.’ Sam Amidon thought he had a pretty good idea what direction his new album Lily-O was going to go. Then he started recording it. Out now via Nonesuch Records, what turned out to be a collection of distinctive, enveloping songs rooted in folk music didn’t begin that way at all. In fact, the Vermont-born singer, guitarist, fiddler and banjo player had initially envisioned an album based more on the improvisational material he and jazz guitar great Bill Frisell developed together a couple of years ago while touring New England as a duo. ‘I thought it was going to be a much more instrumental, weird album of fiddle stuff and snatches of melodies and a little bit of singing, but really strange,’ Amidon says. ‘I didn’t set out for this album to be as much of a songs record as it ended up being.’ There are 10 songs on Lily-O, to be exact, and they include bright banjo and clickety-clack percussion on opener ‘Walkin’ Boss,’ the mournful interplay of fiddle and guitars on ‘Blue Mountain’ and glimmers of Frisell’s electric guitar framing Amidon’s plainspoken vocals on ‘Maid Lamenting.’ 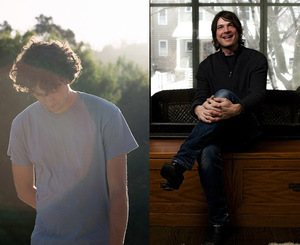