Take cover: there’s a storm coming. With its lyrical thunderbolts, lightning-flash fretwork and ground-shaking grooves, Black Wind Howlin’ is a record to blow your roof off – and Samantha Fish has stood at the eye of the hurricane. ‘It has a rebellious streak,’ says the bandleader of her game-changing new album, ‘and a prevalent theme is, ‘I’m not gonna take your sh*t anymore.” Released in September 2013 on Ruf Records, Black Wind Howlin’ flips a finger at the clich?? of the ‘difficult second album’, firing off 12 classic tracks that chart Samantha’s evolution as songwriter, gunslinger and lyricist. ‘Since completing Runaway back in 2011,’ she reflects of her solo debut, ‘I’ve been on tour pretty much non-stop. I’ve spent a lot of time writing, playing and listening to music. I feel like the themes and the sound of my music have matured. To me, it’s about the human experience from my perspective, as well as people I’ve come into contact with over the last few years.’ While lesser artists work to a template or settle into a pigeonhole, Samantha shifts her shape across the Black Wind Howlin’ tracklisting. She can be brutally rocking on cuts like the tour bus snapshot of ‘Miles To Go’ (‘Twelve hours to Reno/ten hours til the next show’), the swaggering ‘Sucker Born’ (‘Vegas left me weary, LA bled me dry/skating on fumes as I crossed the Nevada line.’) and the venomous ‘Go To Hell’ (‘Oh, this ain’t my first rodeo/You hit yourself a dead end/Your voodoo eyes, ain’t gonna cast a spell/So you can go to hell!’). ‘I’ve become tougher,’ she notes of these head-banging moments, ‘and I think that was reflected in the sound we went for.’ 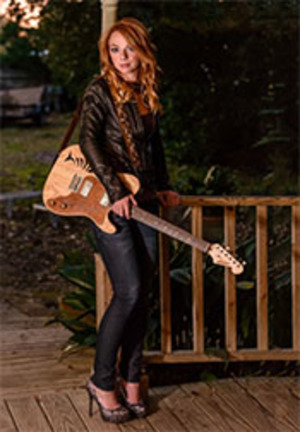