Sierra Leone’s Refugee All Stars share experiences of violence, loss and the tedium of life in the camps. But when they make music together, something unexpected emerges: buoyant grooves and fierce optimism.’ ‘ NPR The globally acclaimed Sierra Leone’s Refugee All Stars return with their third studio album, Radio Salone, out April 24, 2012, on CD and limited-edition 2LP vinyl via Cumbancha. Produced by roots reggae, soul and Afrobeat guru Victor Axelrod, aka Ticklah, (Sharon Jones and The Dap-Kings, Amy Winehouse, Easy Star All Stars, Antibalas) and recorded in Brooklyn’s Dunham Studios, Radio Salone marks the band’s most musically sophisticated collection of songs to date. The album is the follow-up to the band’s 2010 album Rise & Shine, which was the #1 album of the year on the World Music Charts Europe. Out of dark times, Sierra Leone’s Refugee All Stars have always made music rife with hopeful messages and joyful rhythms. Radio Salone is no different, but this time it feels like a milestone album for the group. When they stepped into the studio for the Radio Salone sessions, they began laying down tracks with a definitive vintage African vibe, connecting traditional West African sounds with roots reggae in ways that they had never before explored. Employing analog technology, the band used mid-70s era microphones and 16-track tapes. With the limited takes that tape imposes on the recording process, there was often just one chance to create perfection. But perfection to this band means embracing unplanned nuances, allowing the visceral qualities of music to shine, letting the process play out in real time. The mics don’t shut off between the album’s tracks ‘ an invitation to the listener to join the band on their creative journey. Having persevered through the horrors of the Sierra Leonean civil war, band leader Reuben Koroma and the group continue to musically evolve in exciting ways, well past their jam sessions in the Guinean refugee camps and the rawness of their first recordings in their native capital of Freetown. The songs are infused with intricate dub elements not found in their earlier material and interludes are featured as part of the album flow for the first time. From the hollow echoes of the congoma (also known as the marimba ‘ a percussion instrument with wooden keys and resonators) in album opener ‘Chant It Down’ to the bubbling rhythm of lead single ‘Mother In Law’ to the irresistible hook of ‘Big Fat Dog,’ there are thrilling discoveries around every corner. While the band initially gained fame through the power of their story and message, Sierra Leone’s Refugee All Stars have since become one of Africa’s most active touring bands, and the years of experience are reflected in the virtuosity of their performance on Radio Salone. 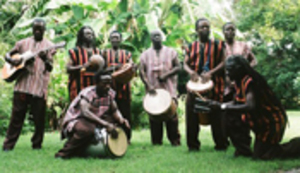