Sine Nomine, Southern New England’s Early Music Choral Ensemble is an auditioned chamber choir based in Fall River, MA. Now in its 17th season, these twenty-two voices perform music from the Middle Ages through the 21st-century, with a special emphasis on a cappella repertoire. Sine Nomine has collaborated with the Boston Camerata, Newport Baroque, Providence College, and was featured at the 2005 Organ Historical Society National Convention. The group draws its members from across southeastern Massachusetts and Rhode Island. Savor the lush choral polyphony of the Renaissance! Enjoy Allegri’s long-treasured Miserere Mei, Deus, along with singer-selected masterworks by Byrd, Tallis, Morley, Palestrina, Gibbons, Vittoria, and more. This concert will showcase the diverse talents of our members by featuring many small ensemble arrangements, giving the audience a more intimate experience of some of its favorite music. 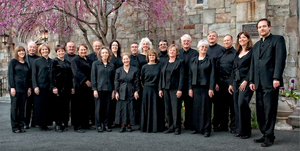