The Catskill Mountains hid rock ‘n’ roll’s best kept secret for almost 18 years. Then in 2008, singer and songwriter Arleigh Kincheloe said goodbye to her hometown hideaway and moved to New York City to start Sister Sparrow & The Dirty Birds. In the years since, the group has performed more than 600 shows, released two full??length albums and an EP produced by Randy Jackson (American Idol), and enchanted tastemakers ranging from The Wall Street Journal and LA Times to Glamour, USA Today, and The New Yorker. They have shared the stage with such heavyweights as Gov’t Mule, Dr. John, Trombone Shorty, The Avett Brothers, Counting Crows, and Galactic, and have turned audiences into believers through appearances on the festival circuit at Bonnaroo, Firefly, Hardly Strictly Bluegrass, Voodoo Music Experience and many more. On May 19th, the band will unleash their most rambunctious, raucous, and righteous recording to date in the form of T​he Weather Below,​which features the band’s roster of her brother, Jackson Kincheloe (harmonica), Sasha Brown (guitar), Josh Myers (bass), Phil Rodriguez (trumpet), and Brian Graham (saxophones), and Dan Boyden (drums). So, what is it about this ‘hard soul collective,’ as Arleigh so eloquently puts it, that has engendered such passion from both the press and the people? ‘It’s loud, fun, and it’s supposed to make you feel good,’ she declares. ‘That’s the goal.’ Sister Sparrow & The Dirty Birds accomplish that goal tenfold with a saucy sonic brew of rock, blues, gospel, and soul. In order to perfect that signature amalgam, the band retreated to the iconic Bear Creek Studio (James Brown, Eric Clapton), just outside Seattle, WA. Locked in the studio for three weeks, they worked closely with producer Ryan Hadlock (The Lumineers, Vance Joy) and cooked up ten irresistible anthems. ‘In the past, we did every other record while we were still on the road,’ says Arleigh. ‘This time, we blocked out time to immerse ourselves in the recording process. We lived at the studio and worked for 15 hours a day. Ryan was everything I’d hoped for. He saw my vision and added his own flavor. Plus, the studio is so beautiful. We were in a barn in the woods, which was very reminiscent of the Catskill Mountains for me. I felt right at home.’ The group takes flight on the first single ‘Mama Knows.’ Bolstered by boisterous horns and bluesy grit, the track serves as a soulfully sweet ode to moms everywhere. ‘The idea for the chorus popped into my head when I was hanging out with my sister,’ Arleigh recalls. ‘We were thinking about our mom. She’s a huge influence on why I sing. She was my role model. She sang too, and I’d attend her gigs as a little kid. She was so powerful and beautiful’just a queen in my eyes. On the flip side, she raised us to be really humble. I wanted to do something to show my appreciation to her and mothers like her everywhere.’ Then there’s ‘Prison Cells,’ which swings from a bright verse into a wild chant that encourages living it up in the moment with the people who matter the most. ‘It’s about getting in trouble with your best friends and letting the fun take over,’ she goes on. ‘We’re definitely prone to do that in my family. We’ll get into trouble, but we’ll be singing and dancing all the way.’  Elsewhere on T​he Weather Below,​’Disappear’ flaunts a South American??style cinematic shine, while ‘Don’t Be Jealous’ points the spotlight on Arleigh’s passionate pipes in between a harmonica swell. ‘That’s The Dirty Birds anthem,’ she states. ‘It’s the story of us on the road with me and a bunch of dudes and all of our trials and tribulations along the way. We’re a crew, and we all have each other’s backs. This is a family. That theme runs throughout everything.’ Ultimately, Sister Sparrow & The Dirty Birds stand poised to shake up rock ‘n’ roll all around the world. ‘This all stems back to why I loved performing and singing to begin with,’ Arleigh leaves off. ‘I want to make crowds happy and see them smile and dance. Singing brings me so much joy. I hope our music does the same for everyone.’ 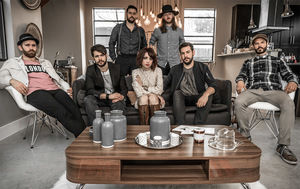