Smokestack Studios is a collective studio of artists housed in Fall River’s historic Metacomet Mill. The mill, Fall River’s oldest standing textile mill, sits directly above the Quequechan River, and looks out under the Braga Bridge into Battleship cove. The thirteen artists housed in Smokestack Studios work in a diverse range of mediums and styles. Although the artists work independently, there is a strong culture of mentorship and collaboration woven into the fabric of the studio, especially because the group includes teachers and their former students, husbands and wives, and parents and their children. This exhibit showcases works by twelve artists, who draw inspiration from many different sources, but are influenced by each other and by the post-industrial landscape they inhabit together. Participating Artists: Eck Follen Gail Fredell Brad Herzlich Carrie Hyde Tyler Inman Alphonse Mattia Isabel Mattia Nora Rabins Rosanne Somerson Charlie Swanson Sira Udomritthiruj Nick Ventola Opening reception will take place on Saturday, October 17th from Noon – 2:00 p.m. Admission is free. The public is cordially invited. 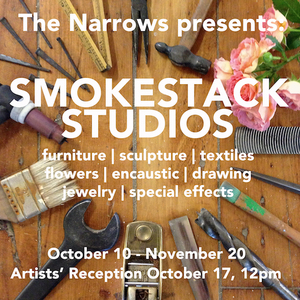