When Rex Fowler and Neal Shulman of the critically acclaimed duo Aztec Two-Step burst upon the scene in 1972 on Elektra Records, they were often reviewed as having the ‘East Coast sensibility,’ ‘intellectual lyricism,’ and ‘ethereal harmonies’ of their legendary predecessors, Simon & Garfunkel. Renowned for bringing the folk/rock music of the 1960s into the ’70s as staples of progressive FM and college radio, Aztec Two-Step continues to be one of acoustic music’s most respected and enduring acts. Possessing such a rich musical legacy of their own, few groups are more qualified to interpret and perform the timeless songs and harmonies of Simon & Garfunkel. This show will feature Rex & Neal performing music from their Simon & Garfunkel Songbook plus Aztec Two-Step fan-favorites from their long and remarkable career! 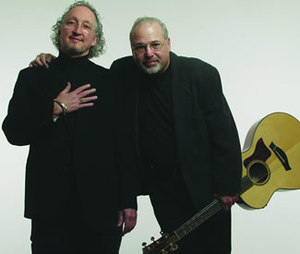