Asleep at the Wheel has seen miles and miles of Texas. They got their kicks on Route 66. And, in 2010, the band clicked another milestone on the odometer ‘ their 40th anniversary. Now in their 44th year, the band continues to introduce the western swing genre to a new generation on tour and takes audiences on the ride of a lifetime with their play, ‘A Ride with Bob.’ ‘It’s been an amazing ride. From Paw Paw to San Francisco to Austin, we’ve seen it all,’ says Wheel front man Ray Benson. ‘But, rest assured, there is still so many exciting projects in the works. The Wheel keeps rolling!’ It all started when Ray Benson, Floyd Domino, and Lucky Oceans, along with a Vermont farm boy named Leroy Preston; Virginian Chris O’Connell; and Gene Dobkin, a bass player and fellow classmate of Benson’s from Antioch College in Yellow Springs, Ohio, joined forces. They began with a simple goal: to play and help revive American roots music. Asleep at the Wheel landed a gig opening for Alice Cooper and Hot Tuna in Washington, DC in 1970. At the height of Vietnam, many Americans were using their choice of music to express their stance on the conflict in Southeast Asia. ‘We wanted to break that mold,’ said Benson. ‘We were concerned more with this amazing roots music, which we felt was being lost amid the politics. We were too country for the rock folks and we were too long-haired for the country folks. But everybody got over it once the music started playing.’ Over their history, Asleep at The Wheel has garnered nine GRAMMY Awards and released more than 25 studio and live albums, and there is no sign of slowing down any time soon. Just last year they earned a Grammy nomination in the newly minted Best Americana Album category for their critically acclaimed Willie & The Wheel, on Bismeaux Records. Most recently, another collaborative project paired the band with the legendary lead from Bob Wills & The Texas Playboys, Leon Rausch. The distinguished velvety vocals that voiced the King of western swing partnered with ‘post-modern kings of Texas Swing’ on It’s A Good Day, which USA Today called, ‘swing from the heavens.’ It was Leon who first suggested to Ray in the 1970’s that The Wheel record Get Your Kicks (on Route 66). The Wheel has now recorded the hit 4 times in 4 different decades, with this latest version featuring Leon. 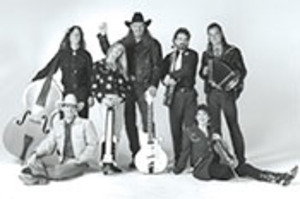