It’s a Mardi Gras party featuring the King of Zydeco. American musical legend Stanley ‘Buckwheat’ Dural Jr.’along with his band, Buckwheat Zydeco’is the preeminent ambassador of Louisiana zydeco music. 2010 marks Buckwheat Zydeco’s 30th anniversary, and Buckwheat is celebrating with the release of his new CD (and Alligator Records debut), Lay Your Burden Down. The New York Times says, ‘Stanley ‘Buckwheat’ Dural leads one of the best bands in America. A down-home and high-powered celebration, meaty and muscular with a fine-tuned sense of dynamics’propulsive rhythms, incendiary performances.’ 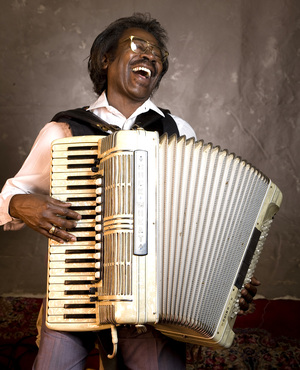