The Chocolate Drops started playing around, rolling out the tunes wherever anyone would listen. From town squares to farmer’s markets, they perfected their playing and began to win an avid following of foot-tapping, sing-along, audiences. In 2006, they picked up a spot at the locally-based Shakori Hills Festival where they lit such a fire on the dance tent floor that Tim and Denise Duffy of the Music Maker Relief Foundation came over to see what was going on. Rhiannon remembers being skeptical when this local Hillsborough, N.C., guy with a goofy smile and a roster of old blues musicians offered to take them on and promote their music. The band was still figuring out who they were and Duffy was offering to house them with people like Algie Mae Hinton, musicians who were not pretenders to a tradition, but the real thing.

The band moved up through the festival circuit, from the Mt. Airy Fiddler’s Convention to MerleFest. They shared the stage with their new fan, Taj Mahal, and traveled to Europe. In 2007 they appeared in Denzel Washington’s film, The Great Debators and joined Garrison Keiler on Prairie Home Companion. In 2008, they received an invitation to play on the Grand Ole Opry. ‘The Drops were the first black string band to play the Opry,’ Duffy notes. ‘The Opry has a huge black following but you don’t see that on stage.’ Opry host, Marty Stewart, pronounced the performance a healing moment for the Opry.

Rolling Stone Magazine described the Carolina Chocolate Drops’ style as ‘dirt-floor-dance electricity’. If you ask the band, that is what matters most. Yes, banjos and black string musicians first got here on slave ships, but now this is everyone’s music. It’s OK to mix it up and go where the spirit moves. 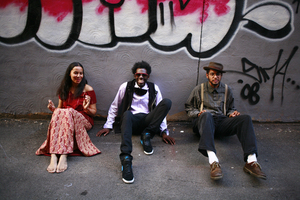