Ed Kowalczyk, founding member, songwriter and former lead singer of LIVE, opened a new chapter in his already illustrious career in 2009 with the launch of his solo career. With over 20 million albums sold worldwide, Kowalczyk has built an impressive r??sum?? in LIVE that includes eight full-length albums that have reached gold and platinum status in nine countries and nine Top 10 hit songs, including the crossover smash ‘Grace’ from his debut solo album and classics such as ‘Lightning Crashes,’ ‘I Alone,’ ‘Selling The Drama,’ ‘The Dolphin’s Cry,’ and ‘Heaven.’ Don’t miss Kowalczyk’s trademark vocals, electrifying stage presence and sweeping diversity as a performer in this special concert where he will celebrate the 20th anniversary of the classic LIVE album ‘Throwing Copper’ by performing it in its entirely along with other hits and fan favorites. 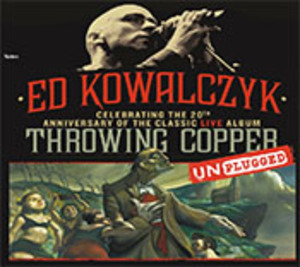